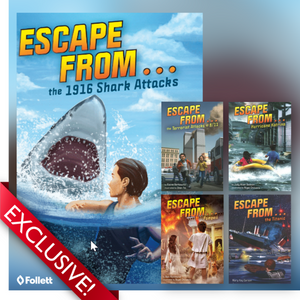 Don’t miss the awesome Escape From… series from Little Bee Books, with one exclusive title – Escape From… the 1916 Shark Attacks – available only from Follett for a limited time. Based on real historical events, and perfect for Grades 3-6, these action-packed titles are sure to get readers’ adrenaline pumping! Grab a copy of the exclusive title or the whole series today.

This is a new title in the series that is exclusive to Follett!

Stay out of the water! During the summer of 1916, the “Jersey Man-Eater” – a great white shark – terrorized the coast of New Jersey. Based on real events, new friends Ed and Mike must work together to survive one of the deadliest shark attacks in history!

Tony is excited to start middle school. He's curious to meet new kids and is looking forward to the first field trip of the year. Tony's sixth-grade class is visiting his dad's office in the World Trade Center, one of the tallest buildings in New York City! Meanwhile, Elizabeth misses her old school and her old friends in Queens. So, the thought of spending a whole day watching her new classmates make jokes and play around on a field trip has her feeling anxious. Then, the unthinkable happens. Airplanes have been flown into each of the World Trade Center towers, and in an instant, the world is turned upside down. Elizabeth and Tony are separated from their class and need to rely on each other to survive one of the worst terrorist attacks in American history.

For twins Jo Jo and Sophie Dupre, Hurricane Katrina isn’t the most important thing on their minds – not compared to their mother's cancer treatments, Sophie’s swim meet, and Jo Jo’s upcoming coding competition. But when the storm intensifies and there’s only one seat in their aunt’s car, Mom has to be the one to evacuate. The twins and their father are stuck at home in the Lower Ninth Ward of New Orleans.

Mount Vesuvius is ready to erupt, threatening to destroy the city of Pompeii and everyone who lives there. Will new friends Thalia and Felix be able to escape, or are they destined to be buried under rock and ash?

The unsinkable Titanic is not quite what Sarah expected. Instead of dining with movie stars, she finds herself having more fun in steerage with the family of her new friend, Patrick, a bellboy. He shows her all the secrets that the greatest ship in the world has to offer, like heated swimming pools and first-class cabins. But then… disaster! The ship crashes into an iceberg, and water begins rushing into the lower decks. The Titanic is going down fast into the deep, icy Atlantic. Can Sarah find her new friends in time? Can Patrick do his duty and also save himself? Will either of them manage to escape one of the deadliest shipwrecks in history?

Biology, Chemistry and Physics for the IB Diploma

Trust experienced and best-selling authors to navigate the new syllabuses confidently with these coursebooks that implement inquiry-based and conceptually-focused teaching and learning.Developed in cooperation with the International Baccalaureate (IB)Shop NowThe new IB Physics Guide is much more diverse than previously,...
Read more

In today’s teaching and learning landscape, some topics can be hard to approach, discuss, and especially teach. Educator Larry Swartz has created a presentation on this topic, during which he shares an overview of recent literature sources that support teaching...
Read more

One of my favorite parts of being a librarian is helping our students find and connect to books. This happens in the library, within classrooms, in the lunchroom, at after-school events, and even walking down the hallway. Discovery and connection can...
Read more

Each year, experts at Follett compile a list of contenders for the winners of the American Library Association (ALA) Youth Media Awards (YMA) before the January announcement to give educators the inside scoop and purchase the top picks beforehand on Titlewave. Below,...
Read more

As one of 25,000 schools that use Follett Destiny® Resource Manager to easily track all district assets, you have access to an easy-to-use, centralized school management system that enables you to manage and distribute curriculum and technology resources, ensuring that you’re...
Read more

5 Ways to Unleash the Full Power of Destiny Library Manager